In permanent crisis mode, how do we react to events that can be interpreted in amazingly different ways through Fake News? On May 10, 2022, political scientist Mag. Natascha Strobl discussed this question with the two business ethicists Prof. Thomas Beschorner and FH-Prof. Markus Scholz.
Dr. Daniela Ortiz moderated the event, hosted by the Institute for Business Ethics and Sustainable Strategy (IBES) at the University of Applied Sciences for Management & Communication. 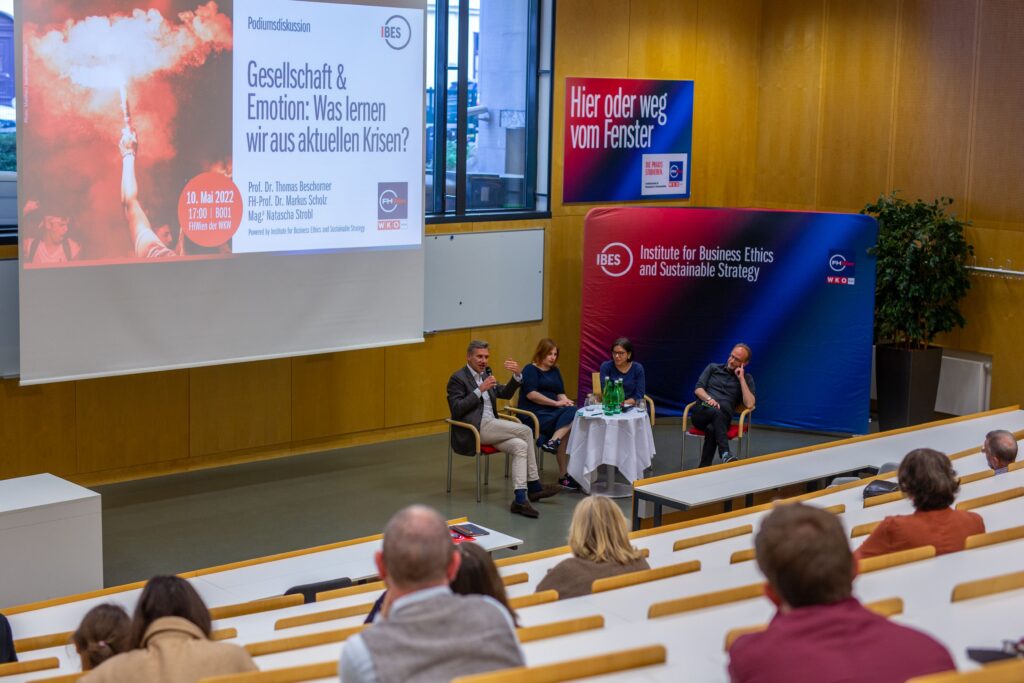 In her introductory presentation, Natascha Strobl explained that we are currently in a phase of crisis consolidation. The process of crises merging into each other already started before the Covid-19 pandemic. This condensation of crises is accompanied by political erosion. In this process, the understanding between the governing and the governed is becoming increasingly blurred.
According to Strobl, Donald Trump’s presidency was the high point of this development so far, which can be described as five years of a state of emergency. The Trump era can be used to explain the political strategy of emotional overwhelming. Due to the permanent production of scandals, time for analysis and free spaces for mutual exchange are lost. Discursive encounters are made more difficult, which leads to a hardening of the fronts. In a further step, the “crisis consolidation policy” presents the population with simple solutions and itself as the bringer of salvation. This offer usually includes a “back to the past,” including nationalist and sometimes fascist ideas. This process of erosion occurs when the democratic forces of a political system have difficulty presenting crisis management solutions themselves.

Covid-19 pandemic as a burning glass

In the following discussion, Thomas Beschorner noted that the information society has picked up speed, but that a lot of nonsense is spread because of the large amount of information. The resulting uncertainty increases the susceptibility to simple answers to complex questions. He describes this phenomenon in his book “In schwindelerregender Gesellschaft.” In this context, the Covid-19 pandemic acts as a burning glass that amplifies additional challenges (such as the climate crisis). Conspiracy myths thus appear as easy ways out of this uncertainty.
Markus Scholz sees several incentives that make conspiracy myths attractive to people. On the one hand the positive self-perception, which results from the alleged knowledge advantage over others. Second, the desire to have their own structure and simple explanations for a complex world, which give conspiracy believers a sense of security and control that, counteracts the perceived powerlessness in the face of current crises.

Permanent crisis as a symptom of neoliberalism

Markus Scholz sees the state of permanent crisis as a symptom of the neoliberalism of modern Western society. People are increasingly becoming objects, while markets are seen as subjects. In this subject-object reversal, people lose influence and control. Society finds itself in a feeling state of collective powerlessness. This state feeds susceptibility to conspiracy myths and makes simple answers to complex problems so attractive.
For Natascha Strobl, this state of feeling is absurd because it suggests a possible return to a “pre-Covid 19 state.” Yet this normality forms the basis for the current permanent crisis mode. From their perspective, it would be more pragmatic to think about other, better systems.
Mediation and defense as contributions of science
At this point, Thomas Beschorner pointed out that already Kant understood the Enlightenment as never finished, but as an ongoing process. In addition, reason is the instrument of the advancing enlightenment. According to Beschorner, the question arises whether the limits of reason have been reached in view of the “blurred discourse”. This is because people are often subject to fallacies: great events must have great causes, and the perception of the myth that accompanies an event is perceived more strongly than the details that led to the event itself. Moreover, people tend to have a higher trust in personal information from their known environment (e.g. Telegram) than in abstract scientific studies.
Markus Scholz notes that all people are subject to a certain degree of influence. This is determined, among other things, by education and status. Scholz sees the neoliberal program as a kind of counter-enlightenment. For in a life characterized by the constraints of the pith, emotion helps people get moving again. In this context, the media have a special role to play as translators of scientific information to the public. Researchers, too, must increasingly assume their responsibility toward society. This includes, on the one hand, informing the public in a way that is appropriate to the target group and, on the other hand, defending scientific freedom in order to be able to push forward necessary ideas and innovations.

Democracy and dialogues as ways out of the crisis

In the lively discussion with the audience that followed, it also became clear that there could be no one-size-fits-all solution for overcoming the impending permanent crisis. Natascha Strobl appealed to defend democracy and find democratic solutions to the crisis. She emphasized that it is the task of politics to work in the interests of the people. Thomas Beschorner referred to new forms of democratic participation such as citizens’ councils or journalistic experiments like “Austria speaks”. In these, people with different opinions meet and get back to talking. Asked about the possibility of reconciliation in the case of hardened fronts, Beschorner concluded by using an analogy from pop music: understand, forget, and forgive.