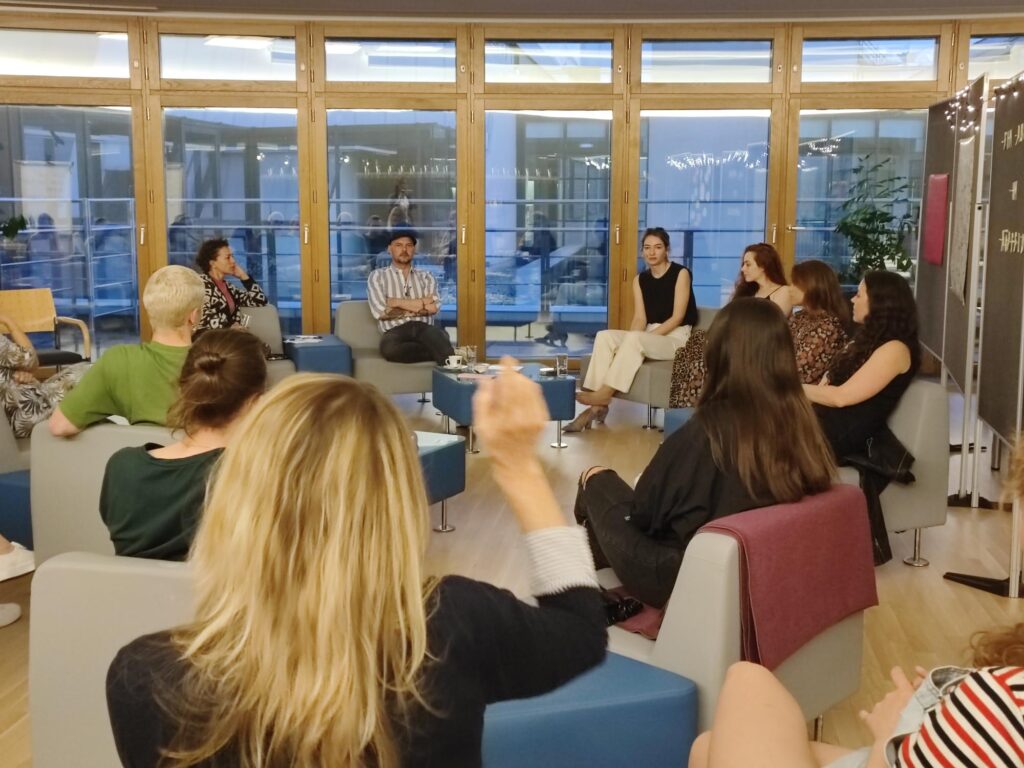 For the event, ballroom C517 in the C wing of FHWien of WKW was transformed into a cosy feel-good ambience with sofas. After the welcome and introductory words by Caroline Schranz, Johanna Hirzberger and Carolin Schmid, around 20 guests listened to the feature “Mit einem Warmen kein Pardon. The case of Franz Dom”.

Based on original investigation and court files of Franz Doms, who was murdered by the Nazi regime, listeners were immersed in the everyday life and persecution of homosexual people in National Socialist Vienna. In his feature, Pettinger also questions his own acceptance as a homosexual man in today’s society.

Afterwards, the discussion process started based on various previously suggested categories. These included sound design, use of music, rhythm, levels and much more. Among other things, Pettinger gave information about his approach, the genesis, the idea, the realisation and why the fate of Franz Doms was so close to him.

“Ein Abend im Hörfeld” was created to give audio creators a space to exchange ideas, learn from each other and simply to give great productions a place to be heard and celebrated.

is the only educational station with a terrestrial frequency in Vienna and also broadcasts in Vienna, Lower Austria, parts of Styria and Burgenland via DAB+. At the training station, students of “Journalism and Media Management” learn how to do radio in theory and practice. The results can be heard in the programmes Kulturcollage, Tonwerkstatt and Radiolab. Students with appropriate previous experience can also produce their own programmes and broadcast them live or recorded. One example is Femality – the feminist radio magazine (every Wednesday from 8 pm)! More information at radio-radieschen.at.

About the editorial team of Radio Radieschen

Apart from content that students produce in lectures, a small but fine radio editorial team provides quality content! Johanna Hirzberger and Carolin Schmid work under the direction of Caroline Schranz on programmes such as Science Radio, Start Me Up – das Gründer:innenmagazin, #Vienna or the feature format Hörfeld. Students are encouraged to participate in the production or to put their own formats on the air.