From June, 2 – 8, 2019 five students from FHWien der WKW took part in the international radio project “EU On Air” which took place in the Georgian capital Tbilisi on the topic of Food Culture and their Spaces. The task of the students was to research topics on site and implement them as radio features, which were broadcasted live in a one-hour radio program. 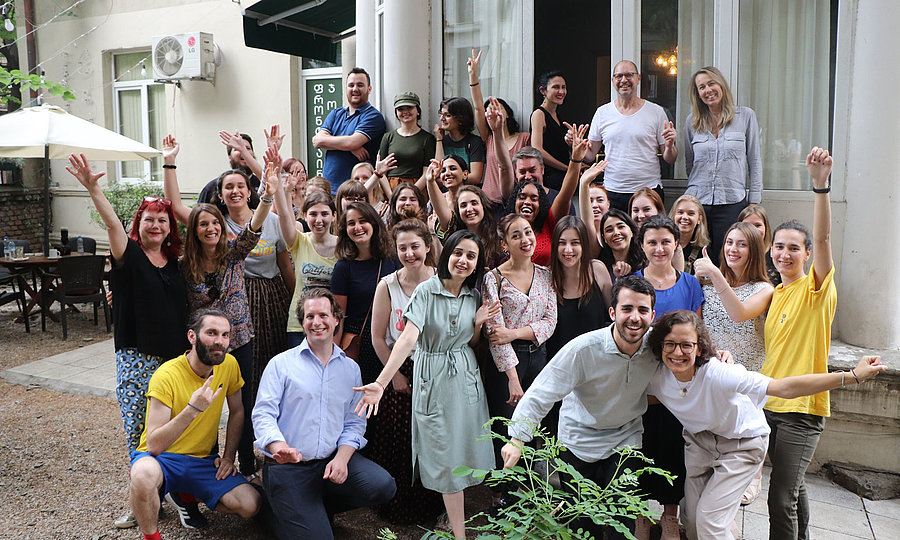 For the third time, Journalism students from FHWien were involved in the project within the framework of the Erasmus program and exchanged their classrooms for the radio studio. This year’s intercultural course was organised by the Georgian Institute of Public Affairs (GIPA). Next year, “EU On Air” is coming to Vienna for the first time in 2020 and will be organised by the Study Programs Journalism & Media Management.

Before the students travelled to Tbilisi, a twenty-minute radio feature was produced and cross-media processed as part of a course: In “Viennese Tafelspitz – famous speciality from the 15th century till today”, students deal with the traditional Austrian dish, Tafelspitz a favorite of Emperor Franz Joseph I’s with a special position in the Viennese cuisine. Above all, a critical examination of the topic of meat production between organic rearing and mass animal husbandry was called for, and the eating and consumption habits of Austrian citizens were questioned.

The student teams from the various countries contacted each other online in advance and were able to listen to the individual multimedia productions online. Together in the Frontline Club in Tbilisi – the radio production studio of the GIPA University – they got feedback from radio journalists on the respective productions. Researching in a country with a foreign culture and language was only one of the challenges to be mastered in addition to recording, interviewing and production techniques.

Intercultural teams (from Azerbaijan, Belgium, Finland, Georgia, Austria and Spain) were formed, topics defined and assigned to a teacher. The students were able to get to know a variety of production methods from different countries and implement them in the context of this year’s topic “Food Culture and their Spaces”: “Food Waste”, “The changing role of women in Georgia” or “Cooking activities in the social institution hand in hand” were some of the topics covered by the eight-minute radio feature productions, which were then broadcast on GIPA radio for one hour.

The intercultural radio project Europe On Air is a course in cooperation with partner universities of the European Journalism Training Association (EJTA).